CGCAD_Engineer1 Member Posts: 12 PRO
November 2020 in Using Onshape
Hi all!
I'm on the verge of setting up a 'clean' model of a product we're developing and I'm trying to decide on a robust, efficient modeling strategy.
I tried finding info on modeling strategies/general guidelines/resilient modeling, but so far have not found much information specifically for Onshape. Hoping to get some input from the great hive mind

The sub-assembly I'm focusing on can be compared to a computer mouse; three parts (lets assume; body, left mouse button (symmetrical to RMB) and scroll-wheel) that share surface continuity. Let's also assume there is some grip texture on the buttons which needs to be the same on the body: 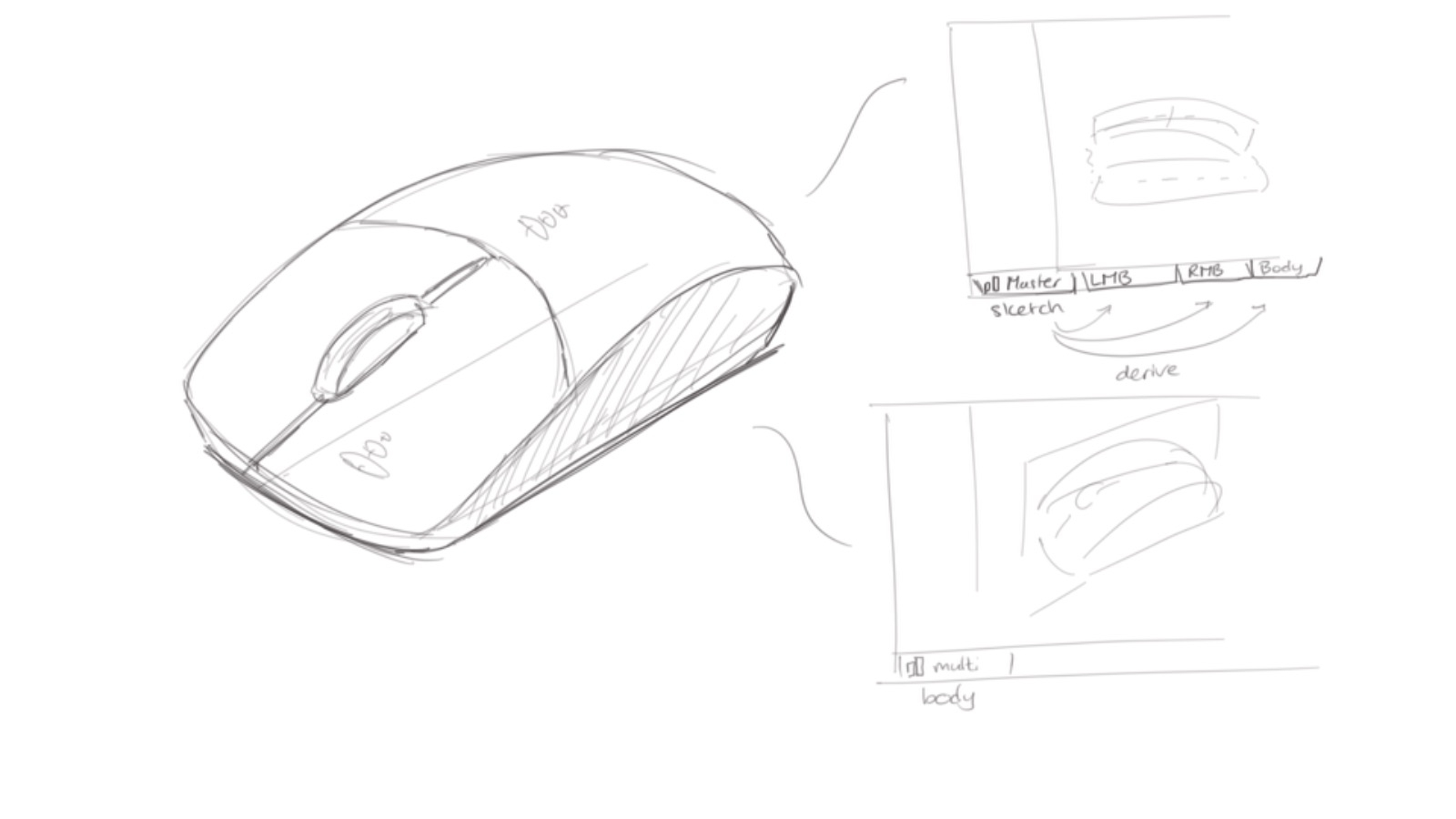 The goals to achieve and things to consider with the clean model are;
- Be able to quickly output several sizes of the product.
This should take into account that for example, a mouse button will become shorter and narrower, but its overall thickness stays the same for manufacturability.
- Eliminate errors and failing features.
Our models are a hodge-podge of features resulting from an elaborate prototyping and testing phase. This has created unstable surfaces/features which unexpectedly break down. I want to prevent errors in say, the mouse button, causing errors in the body.
- Capture design intent.
Models can get individual revisions, but stick to overall shape. So there's curvature continuity between mouse button and body. Also, say the grip texture is adjusted, it should be updated on both the mouse button and the body.
- Speeeeeed
Who doesnt? :P
But we also use these parts to create Tooling. Currently we Derive the part from its Functional design Document into a new Manufacturing design Document. Getting a short regeneration time on this Derive is a huge bonus.
I'm thinking of two approaches:
1) Setup a Master sketch/studio with all Sketches/Reference planes etc. in one Part Studio. Then import and use accordingly for each part in their respective Part Studios.
Pros:
- Each Part has its separate Part Studio, minimizing risk of one part failing leading to all parts failing.
- Can just Derive the one part we need for Manufacturing.
- Master sketch contains the features which should be the same across parts.
Cons:
- There's probably a ton of reference features in the Master sketch document..
2) Have one massive Part Studio using Multi-Body modeling.
Pros:
- There are quite intricate mating surfaces between the parts, next to the shared surface continuity
- Clearly visible that similar features share similar dimensions (grip texture)
Cons:
- Loooooootts of features
- Deriving to tooling will import all Parts, then deleting the ones not needed for Derive (see Turbocharging Onshape). Causes increased regeneration times.
Looking forward to input/advice, tips&tricks, whatever you feel like sharing