robert_horton034 Member Posts: 6 ✭
November 7 in Drawings
I'm creating a wing shape that will be 3d printed. It helps a lot to have a flat edge which will be the side that lies down on the bed of the printer. I've lofted the wing shape and I'm using the trailing edge of the wing to be the edge that lays on the bed. This way the entire wing can be printed without support. So far so good.

A print needs a decent surface area to successfully print; something for that first layer to attach to the bed. Since the trailing edge of the wing is very thin, I'm adding a sizable gurney flap onto that wing trailing edge so that the print has a decent-sized contact with the bed.

Where I run into a problem is in lofting the gurney flap so that it matches and connects to the lofted wing profile.

I've been through the reference guides, the tutorials, and a variety of videos. The loft of the wing works fine but connecting it to the gurney flap has me stumped. I can't find any way to make the wing profile include the gurney flap. I spent several weeks on that attempt. 2d drawings can't be merged into a part. Every time I attempt to loft either the wing profile or the gurney flap as separate lofts that I will then use binary to merge fails because I can't get any lofts to follow a guide or a path. I created a 3d spline that matches the trailing edge but it refuses to use the spline as the path.

Above is the wing profile with the gurney flap. 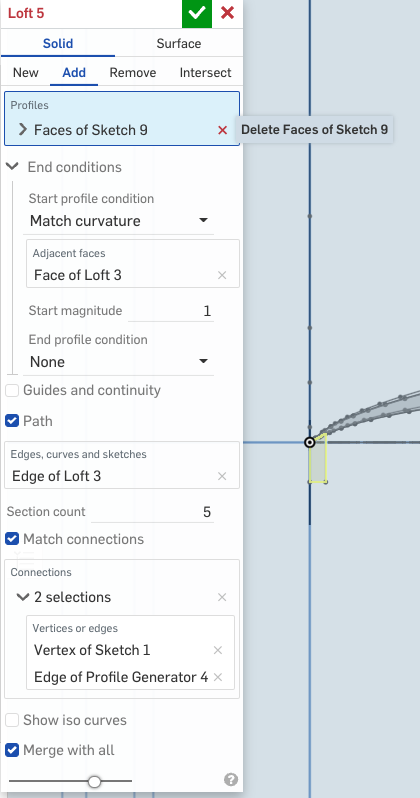 And this is where I get stuck attempting to loft the flap.
0