gauthier_östervall Member Posts: 72 ✭✭
February 2020 in General
This is not a question about a specific feature, it is a question about how I should organize my work in Onshape. I've read a couple of posts from pros here, which advocated the top-down approach. As far as I understand, this implies starting from the whole, then going into details. Some meant that the best was to start in the Assembly, then designing parts as needed. Some others mentioned "Skeletons", I guess the notion comes from other tools, but the principle is the same.

As a beginner, starting on Assembly is very difficult, foremost because the first projects you make tend to be single parts. I'll take this current project of mine as an example, here is a screenshot: 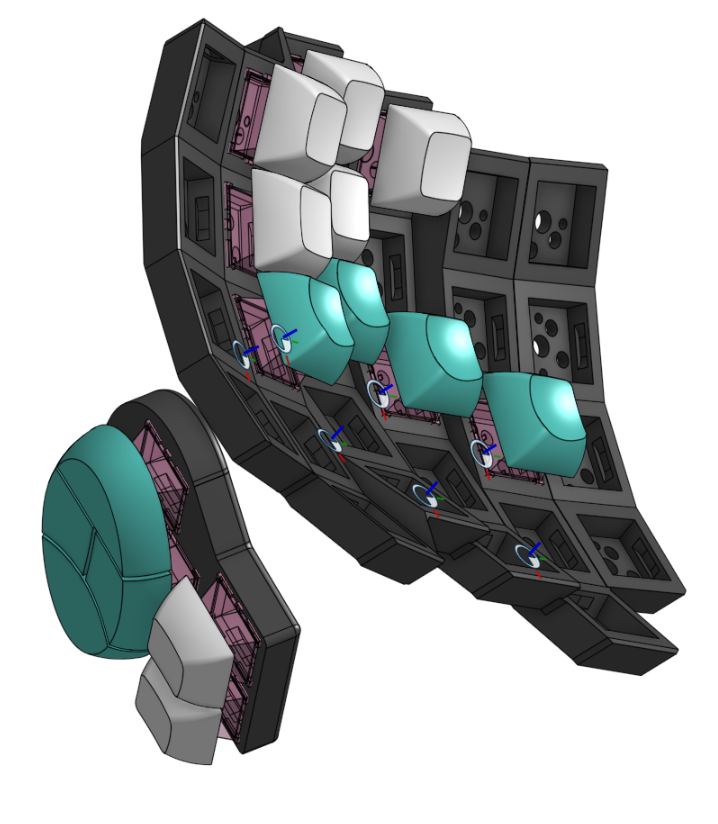 This is going to be an ergonomic keyboard, if everything works out as planned. The main feature is that the keys are placed in a concave well, and that it makes use of thumbs a lot more than a regular keyboard does.

Because these are the main features, and because this was what I thought could make or break the project, I started with these. It's been going well (!).

But it's a bottom-up approach. Now I need to put these two parts into a holding frame, and I'm not sure how I should go about doing that.

1. knowing the frame would be needed anyway, should I have start with that? The general form of the product? Since I was not sure how the shape of the parts would turn out, I felt that "feeling" the general shape would have been difficult. Maybe an early proof of concept on paper, or even in clay...
2. how do you start in Assembly if there are no parts to import?
3. with these parts above in two Part Studios, roughly placed in an Assembly, how would you create the holding frame part? Do I create a new Part Studio, import the existing parts to it and place them there just as in the Assembly above? Or is there a way to import the placement from the Assembly into a new Part Studio?

I'm trying to learn how to think right from the beginning, as well as solving what I have with as little pain as possible.
Tagged:
0