Projected Intersection - Best way to do it?

thomas_aa Member Posts: 19 ✭✭
June 2020 in General
I often find that I need to create parts that are projections or intersections of two sketches/surfaces. What I usually end up doing is extruding first one sketch and then extruding the other, with Intersect.
Is there a better way (Fewer features)? I would almost expect a tool that can take the two sketches as input and output a solid of the projected intersection, but I have not done CAD professionally, so I'm really sure of what to expect.
Also, in this case, I can either do Through all in both directions for an extrude or do Symmetric with a large arbitrary value (so the Symmetric is much less cumbersome to input). Another choice is to extrude to vertex in two directions, matching the perpendicular sketch. Any preferences?
One could argue that I could have placed the sketches on "one side" so I can avoid the double extrusion, but I often work along the center symmetry of my part. (One option I see is to have my original sketches, then create a plane on one side and then create a second projected sketch, allowing for each extrusion to only have one direction.)
Example:
https://cad.onshape.com/documents/1253fd8a5d5343dc54979d38/w/3203fdcfe297b7dda1f4d44b/e/4dbfe57be49fc22ed116154a 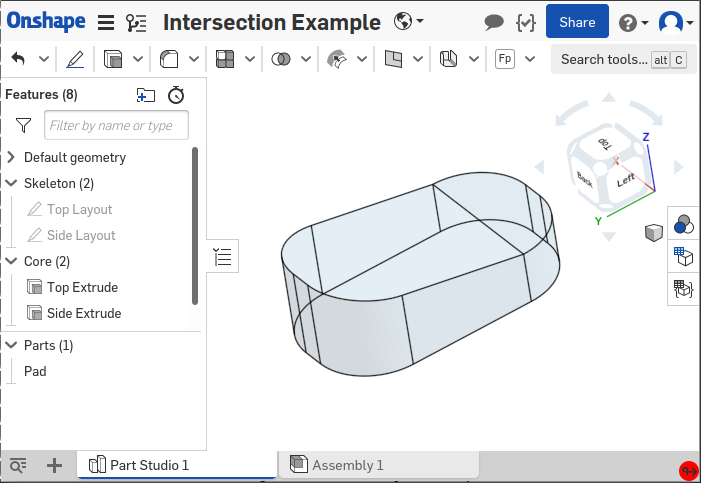