andy_maker Member Posts: 4 ✭
January 24 in Community Support
I am a Boomer, hobbyist and a complete noob being self-taught in Onshape over just the last few weeks.  Nonetheless, thank you Onshape for sharing such a brilliant saas with hobbyists like me.  And, much deep respect to those of you who do this everyday.
As below illustrated, I inadvertently did something that caused my construction lines to show up on ALL part studios including imported files.  Right or wrong, I laid out my initially anticipated construction lines and subsequently duplicated the studio three times keeping these construction lines as the initial sketch in each.  I Projected these construction into subsequent sketches as usable (e.g. non-construction) lines, but when later modifying them and being confronted with over-definitions, I often lazily just deleted the projection linkages rather than track down the conflict.
As the design evolved, I ended up with most of my key elements rotated 45deg.  I could not find/eliminate all necessary constraints that would to allow me to rotate the entire studio so I started to redraw some of these elements as shown to the right of the origin point in the below, rightmost graphic. 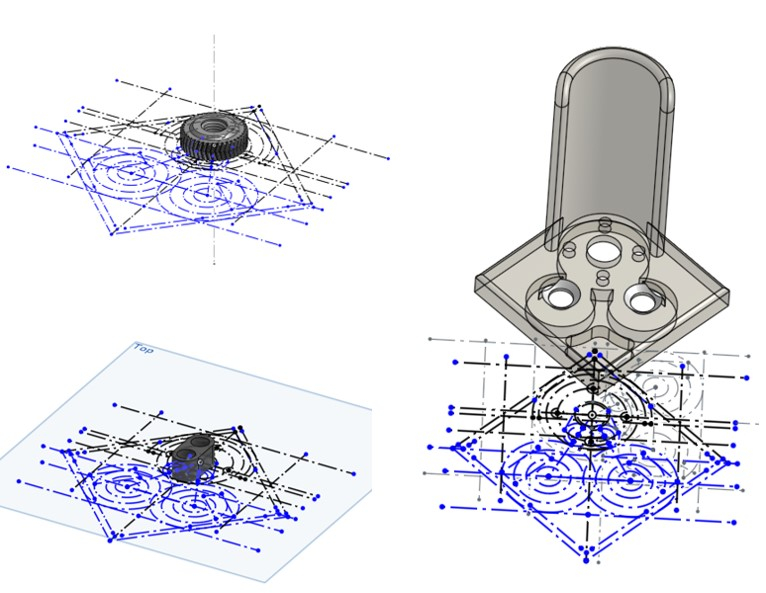 If I did this correctly, here's a link to the document: https://cad.onshape.com/documents/09422fbaff4f3d336a98fd21/w/2f5800b8c894641ba71ee4f5/e/b56438dc88aac817180959fd.  The issue occurred on the Casings studio, fyi, and in case it matters, I deleted this initial "Constr Lines" sketch in the Casings studio after giving up on numerous other attempts to resolve the issue.  I had even saved a version this morning (for the first time) so I would have a fail safe fallback point, but it isn't allowing me to eliminate this issue either.
Sorry for the lengthy narrative.  I am not sure what is or isn't relevant to the issue.  And yes, I did search the forum, but I could not tie a discussion directly to my issue.  Perhaps my terminology is wrong.  I hope this matter is tied simply to a rookie mistake and is not a loss of far too much time in trial and error.  Any help/solutions/pointers are greatly appreciated.
TY,
Andy