michael_kline Member Posts: 11 ✭✭
March 2019 in Community Support
There have been several posts asking about sketch scaling, but most of them have not been touched in a while. I was looking to see if anyone has created a faster work around than starting a new sketch with all of the dimensions based on a variable called "scale factor".

As seen in the attached, I have a fairly complex shape that I would like to scale down to the part I copied it into from the part I drew it in. The sketch has already been modified for scaling, including making the gaps wider and lowering the amount of detail involved. I have also rotated it to the correct angle, but that is a simple transformation. 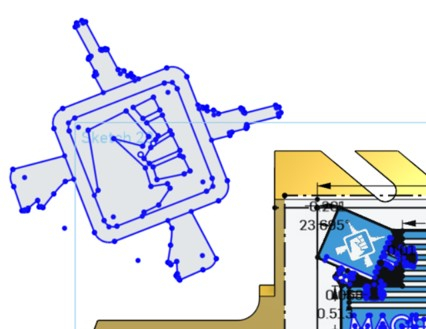