gareth_farrington Member Posts: 6 ✭✭
February 3 in General
I have a problem with .STEP imports when trying to build assemblies: Parts that should have 3 perfectly perpendicular faces... don't.
This only reveals itself as an issue when making an assembly. If I attempt to constrain the part with 2 Planar Mates between the 2 non-perpendicular surfaces the assembly becomes over-constrained. But when I try to track down the root cause its difficult to locate. A quick check with the measure tool shows that the two edges/faces are at "Angle: 90.000 degrees" which sounds perfectly perpendicular. You have to hover the mouse over the number in the measure tool popup to see that it is not truly 90.000: 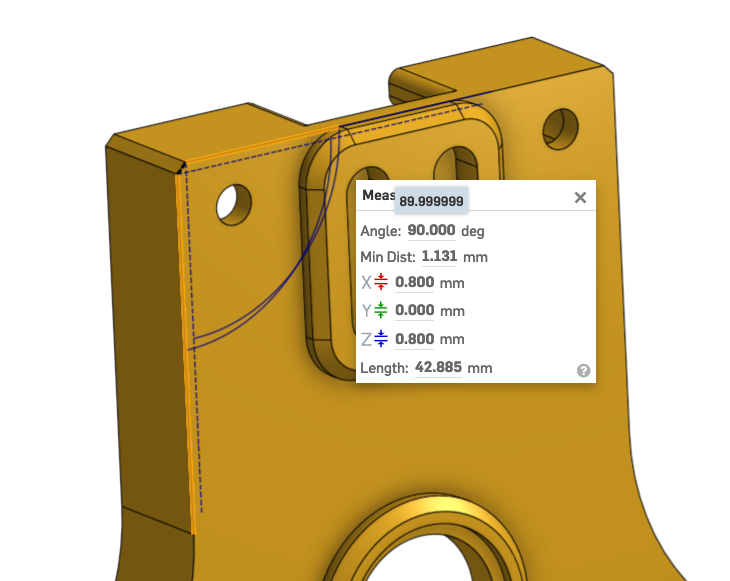 To be fair the measure tool does says "Perp. Lines Angle: 90.000" for perfectly perpendicular lines/faces, but you may have never noticed that detail (I hadn't!).
OnShape seems to be conflicted about whats going on here. The angle indicates that the sides of the part taper inwards slightly relative to the top (its the same 89.999999 angle on both corners). But measuring the distance between the side faces at the top and bottom yields exactly "40.00000mm" for both, so they have to be parallel, right? Or the top face cant be flat? But it clearly is a single unbroken surface. Basically the apparent taper has no effect that OnShape can compute with the precision it represents to the user.
I'm not sure what is going on here. The part was intended to be perpendicular and its so close that I can't fathom why its not. It feels like a rounding error in the imported part (or possibly in the original export). I do want mates to work with parts like this. (I can think of some workarounds, where I create mates aligned to the planes in the part studio, but I feel like I shouldn't have to do that)
Anyone have any work-around for issues like this?
Here is the original STEP file: https://github.com/e3donline/ToolChanger/blob/master/STPs/TC-FACE%201.4.step
And an OnShape Document with a demo of the failing assembly: https://cad.onshape.com/documents/0530bf2aa0250de77f67512d/w/a18e02c7c0c4a57bd313031f/e/6d4827641e3ebffc172c53db