andrew_troup Member, Mentor Posts: 1,584 ✭✭✭✭
May 2015 edited May 2015 in Using Onshape
I use the equivalent in Solidworks incessantly, more often than not at 90 degrees, to "hinge" a plane about a line or an edge or an axis, with the angle relative to an existing plane or face. (I have often wished it would default to 90 degrees in Solidworks).

There are many situations where this capability seems indispensable for the methodical building of an intricate model, but it also comes in handy in straightforward models.
One at random, shown in the attached sketch, is that it is often necessary to create a normal plane for, say, a revolve section.
In this instance a tubular handrail is swept from an arbitrary plane, and a domed plug or endcap is to be revolved.

At present, the "Help" for "Line Angle Plane" is written rather vaguely, and does not make it clear what datum plane the "Angle" is measured from. Unlike in Solidworks, it does not seem that this datum plane can currently be specified in Onshape.

And at present, there seems to be a bug, because I've just submitted a model to Support where the datum plane is not (as you would expect) the sketch plane for the "Line" which is selected as a reference, but one of the construction planes !

In this instance, instead of specifying the 90 degree angle for Plane 1 (which I'm trying to create) from Plane 2 (the sketch plane for the "Line" I specified, which belongs to the sketch of the tubular cross-section)
I've had to specify the angle to the "Front" construction plane ... which conveniently happens to be a round number (140 deg) in this instance, but it could be any strange number, and in any case, that is NOT my design intent, nor is it a realistic one, because Plane 2 could be edited at any future time.

Which is why I am confident this is a bug.

(Moreover, what happens if the sketch plane is roughly intermediate between two construction planes? How do we know which plane it will pick?)

Even once this bug is addressed, I would very much like to see this plane creation tool enriched, so that

a) an angular value could optionally be made the default (until cancelled or changed) [I realise this is a very minor point]
b) as well as sketch lines, the tool could use a straight edge, or an axis (if and when these are implemented in future)
c) in the case of a sketched line, a plane could optionally be specified as the datum ref.
If a plane was not specified, the sketch plane for the specified line would be the datum.
d) If there was no sketched line specified, but an edge or axis, the datum plane would HAVE to be specified by the user. 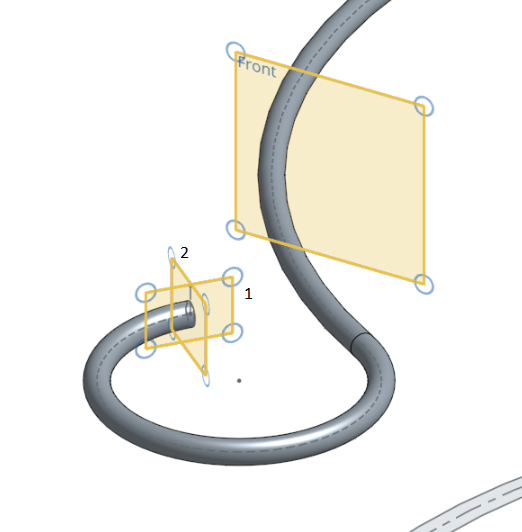