Equal constraint - Use with Care between sketches

andrew_troup Member, Mentor Posts: 1,584 ✭✭✭✭
September 2015 edited September 2015 in Using Onshape
In the excellent webinar on basic sketching which has just gone up on the site, the question came up "How do I relate entities in one sketch to entities in another". Cody replied that at present the only two methods are "Derive Sketch" and "Equal" constraint.

I though it might be worth adding a "Yes, but" to that second option, which if he'd gone into it more deeply, I'm sure Cody would have mentioned.

Essentially, an equal relation in sketch A will make an entity equal to the PROJECTION, into sketch A, of an entity in sketch B. 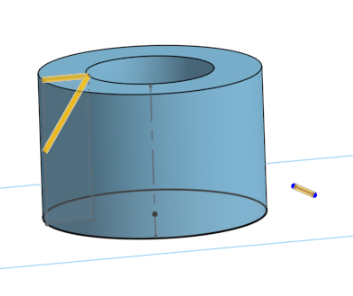 The bottom right line is sketched on plane A, defined by the underside of the hollow cylindrical solid.

I constrain it equal to, even though their lengths are clearly different.

The line at bottom right is actually the same length as the upper one at top left.